Crabby Snacks and Homemades: Eat these with Silver Linings Playbook (or an Eagles game)

﻿
I always remember hearing the expression, "every dark cloud has a silver lining" growing up; a lesson in optimism, that the glass is always half full, and a reminder to always look on the bright side.  Silver Linings Playbook by Matthew Quick is told from the point of view of Pat Peoples, a somewhat mentally disturbed character, who is looking for his "silver lining"  in his life story.

I have to admit, I am a "book before movie" kinda girl, but I saw the movie first on this one, and I'm glad I did.  First, the author doesn't really go into much detail on what the characters look like, so picturing the characters clearly in this book is helpful as you read it.  Second, the book is just weird...but in a good way....and Third...well I don't have a third.  However, (SPOILER ALERT) the book is very fitting that it doesn't have a "happy ending," but a "silver-lining ending."   You can find more about this book here.

OK...so the food. The family in this book is obsessed, or should I say O-B-S-E-S-S-E-D (AHHHH!)...(you'll get it if you read the book) with the Eagles pro football team, and the mom makes the family snacks to watch the games. She makes "crabby snacks" and "homemades." What the hell are "crabby snacks"and "homemades" you ask?  Well, I had to consult my friend Google for this one and found a lot of chatter about them online.  Crabby Snacks actually sound DISGUSTING, but as most processed foods are, probably tastes really good.   It's basically a mixture of canned crab meat, butter, mayonnaise, and a jar of Kraft Cheese mixed together, and then topped on English Muffins, baked, then quartered.  Homemades are essentially a "handcrafted" pasta....such a strange mix of two foods: easy processed food (crabby snacks) and difficult crafted pasta (homemades)...but that is just one weird example in the book - it is so strange.

I did not make the ACTUAL crabby snacks, but I did include a link to a recipe I saw if you dare to try them:
Link to Legit Crabby Cakes and Homemades Recipe

However, I made it a little bit more my style and made:
Lump Crab Bruschetta (my version of "Crabby Snacks")
I followed this recipe: http://fishcooking.about.com/od/crablobsterrecipes/r/Buttery-Garlic-Crab-Bruschetta-Recipe-Italian-Crab-Meat-Appetizer-With-Garlic.htm.

I basically followed the instructions - I  used the lump crab (jumbo lump crab not needed) in the refrigerated seafood section. I think it was about an 6-8 oz jar.

Pappardelle with Corn and Tomatoes (my version of "Homemades"....OK a stretch, but someone "homemade" that pasta!)

http://www.foodnetwork.com/recipes/food-network-kitchens/pappardelle-with-corn-recipe/index.html. I followed the recipe except I added 1 cup of Parmesan cheese instead of 1/2 cup. I also made grilled shrimp to add to the pasta...but I forgot I made the shrimp, so they never made their way to the pasta...oh well...it was clearly still good without it!
I used a bag of dried garlic and chive pappardelle that I bought at a farmers market made by http://www.pappardellespasta.com/.  Here is a picture of the pasta: 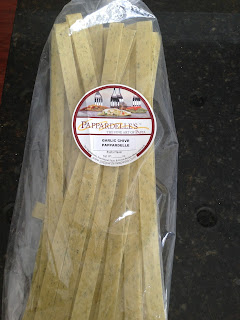 I was all very tasty!  I may try out those original crabby snacks during football season!
And...P.S.:  I was at my pool yesterday as a dark cloud approached over my head (what is it with the rain in Atlanta this summer?)....and gleaming out from behind it was a Silver Lining!!!
Cheers Crabby Snacks, Homemades and Silver Linings!
Posted by Jessica at 10:13 AM No comments:

Fourth of July: A Patriotic Red, White and Blue Cake

Celebrate your independence with a festive Red, White, and Blue cake representing our nations' flag of course!


Assembly:
Enjoy your patriotic masterpiece!
Posted by Jessica at 3:41 PM No comments:

﻿
﻿
Normally I don't blog about romantic Nicholas Sparks books - although if The Notebook didn't bring a tear to your eye, there is something wrong with you.  I downloaded this book on my Kindle and couldn't put it down!  It's the perfect combination of romance mixed with suspense, mystery, and spoiler alert...a happy ending!  I loved it, and can't wait to see it in the movies when it comes out...although, I saw the previews and the characters don't look like what I pictured at all.

Anyway, the main character Katie, has a date with her neighbor, Alex and she makes him dinner - the dinner seemed a little mismatched but each component sounded good - she made a bacon wrapped brie with raspberry sauce for the appetizer, and then for dinner she made stuffed green peppers, shrimp stuffed with crab meat cooked in a scampi sauce, and corn bread.

Inspired by the baked bacon wrapped brie with raspberry sauce, I made Brie Bites in Puff Pastry with Cherry (you could use Raspberry) Preserves. They were really good! 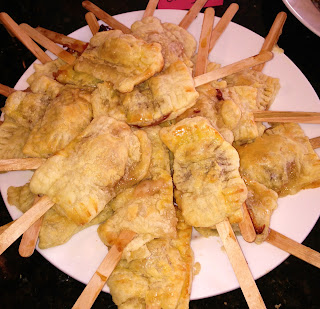