Celebrate St. Patrick's Day with Shepard's or is it Shepherd's Pie 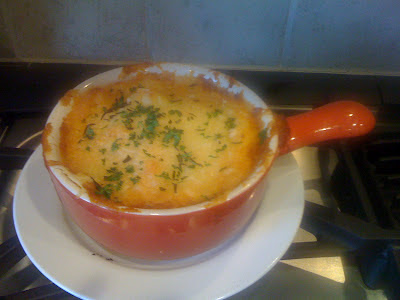 ﻿
﻿
I decided I needed to make something in the spirit of St. Patrick's day, so I made Shepard's Pie.  I made individual ones so they would be more fun to eat for my guests.  I used a recipe from Melissa D'Arabian on the food network.  The recipe is here.
I basically followed the recipe closely, except I used brown sugar instead of white to caramelize the onions (I know, who runs out of white sugar?).  I also used a Yuenling light for the beer, as that is what I had on hand.  To help myself out a little, I bought pre-cut carrot sticks and then chopped them into cubes to save on the carrot peeling step. I probably used a few extra carrots, onions and peas, but veggies are good for you. I also skipped the homemade mashed potatoes and bought the Simply Potatoes mashed potatoes and then added in a little sour cream and garlic to them to make them just right! Also, instead of cheddar cheese I used a combo of Swiss and Parmesan - I think that made them better. I garnished with rosemary and parsley.
I served with a salad, and key lime pie (why?, because it is green) for dessert!  Melissa and Michael came over for dinner and I got rave reviews.  Michael liked it so much that he changed my air filter and light bulbs. Thanks Michael!
Til St. Paddy's next year!
Posted by Jessica at 9:00 PM