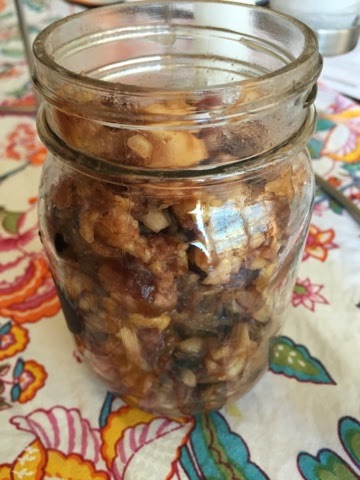 I make this every year for Passover and it is a big hit and makes a lot but typically there is none left at the end of the night!
Ingredients:
- 6 apples (I used 2 delicious, 2 Fuji and 2 Gala)
- 12 Medjool Dates (pitted!) - I used Bard Valley Natural Delights. You can find these by the nuts in the produce section. Don't get the ones with pits - get pitted.
- A 9 oz. box of raisins
- A 10 oz. bag of recipe ready walnuts (I used Planters, found in the baking aisle)
- 1/2 cup of light brown sugar, packed
- 2 Tablespoons of Honey
- 1/2 cup of red wine (I used a bottle of Cabernet that I had left over from last night!)
- 2 teaspoons of cinnamon
- the juice of one lemon
- a pinch of salt
Directions:
- Peel your apples and then chop them in a small dice (cut around the core). After thatI then popped them in the food processed cause I like it very fine dices. That is optional.
- Take your bag of walnuts and either chop them or put them in the food processor to chop them finer - not into walnut dust, but kinda small
-Chop up your dates
- In a BIG bowl, mix together the apples (pour the lemon juice over them at this point), walnuts, raisins, dates, brown sugar, wine, honey, salt, and cinnamon.
- Let it marinate for a few hours for optimal flavor and you are good to go!
Idea: Put this over vanilla ice cream! Ben and Jerry's just came out with Charoset ice cream, but I bet this tastes better!
Posted by Jessica at 1:41 PM