Several years ago, I read The Kitchen Counter Cooking School: How a Few Simple Lessons Transformed Nine Culinary Novices into Fearless Home Cooks, by Kathleen Flinn.  I love picking up a book I haven't read in a while, and rediscovering it from a new perspective.  I decided to read it again, and was captivated by the stories of women who couldn't cook at all, to ladies who could make the most amazing, but simple recipes. It all came down to a little knowledge, real food, and a willingness to push through fear.  Cooking really is all about being fearless - recipes are just guidelines (unless you are baking, and then that is more of a science project), and you really can't mess it up (or not as bad as you think).

While I certainly know how to cook (hello cooking blog), the last few years of crazy work schedule, and the pervasiveness of "convenience" everywhere, has shifted a lot of my cooking to things I perceive as easier.

First, I went for Blue Apron and got a box each week to cook recipes, and while this is true cooking (I mean I must have chopped 100 cloves of garlic with this subscription), it often took more time to cook even with the ingredients all nicely collected in one box.

Then, I went for Freshly, which I actually got this week, which has 6 prepacked meals...but the catch is they are "fresh" and "not frozen."  Don't get me wrong, these are easy to pop in the microwave, healthy, and pretty tasty, but I probably could have spent a short amount of time cooking on the weekend and make my own meals.  If you want to try them out, here's a $40 Off code.

So, back to this book. She inspired me to get back to basics. The author is a trained French chef from Le Cordon Bleu, yet takes such a simple approach to reminding you that it only takes a few ingredients (normally less than 5) to make something outstanding.  We sometimes get so caught up in taking a short cut, and thinking it's more convenient...but really the "real thing" is so much better, is more cost effective, and doesn't take more time.

Some examples:  Basic Alfredo Sauce.  Why do so many people buy jars or boxes to make this?  Did you know ALL you do to make the sauce is take heavy cream and reduce it? (Basically bring to boil and reduce heat and simmer for a while). A pinch of salt, pepper, and parmesan cheese and you are done. Pour it over the pasta.  Not only does it taste better than a box or a jar, but it's easier and cheaper.

Let's get to my favorite recipe in the book...the easiest thing to make of all...which for some reason I thought might be hard...is a Basic Roast Chicken.  When I say it took me less than 10 minutes to prepare, I'm serious.

Let me tell you how easy this is:

1)  Buy your whole roast chicken at the grocery store.  Mine was about 4 lbs and from Springer Mountain Farms, who supposedly treats their chickens humanely. Go ahead and set the oven to 425 degrees Fahrenheit.


2)  Take the brown bag out of the cavity of the chicken which has all the "stuff" and throw it out or save it. Now, you could totally keep it and make something out of it if you want.  I thought about cooking for Sophie, my dog, but decided that was a project for another day.

P.S.  I'm in love with my new butter crock which allows you to keep butter at room temperature.


5)  Put some herbs (I used thyme), salt, a lemon (I used an orange because that is what I had), and maybe a halved onion in the cavity

6)  I think this is optional, but tie up the legs with some twine and tuck the wings under to avoid them burning

I had a roasting pan and in the bottom I cut up a few potatoes (maybe 4) some whole carrots (maybe 6) and some onions (maybe 2). Just cut up what you want and pour some olive oil and salt over them.

All the steps above should take you no more than 10 minutes.

Now, Roast it in the oven for about an hour for a 3 lb chicken.  I did about 90 minutes.  I also pulled out and basted with melted butter about halfway through. I think technically you can also use a meat thermometer to make sure it's 180 degrees F if you want to be technical.

Let it sit for about 10 minutes and then slice it. You can google all kinds of ways to cut it up, but really it won't be pretty.   Just pull the meat off the bones using your common sense and it doesn't have to be perfect. 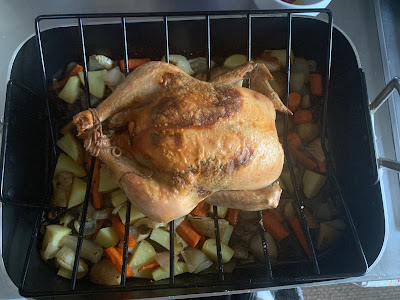 Let me tell you what was perfect. The taste, the aroma, the flavor.  So easy, so good, why don't more people make whole roast chickens?  I think I need to start making one every week.

Here was the finished product.  So YUM. 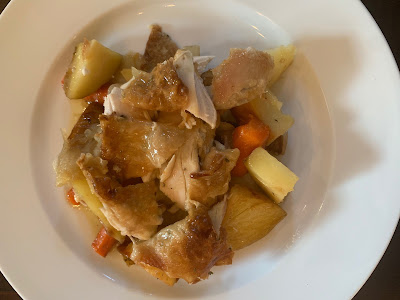 Bonus: I then put the bones in my crock pot with water to make into bone broth. Google it - so healthy.


Have you tried to make a roast chicken before? What's your favorite recipe?