2011 - Read The Power with these Shot Glass Desserts

For 2011, I decided my New Year Resolution would be to see the positive in things more often. I randomly saw the book, The Power, by Rhonda Byrne while wandering Costco (when bored, I go there way too often).  It's the same author who wrote The Secret, another popular book in the self help category. I've never read The Secret, but I figured I'd jump right into the sequel.  Overall, the book is about how to see life through a different angle, through feelings, and positive energy.  While at times, a little "new wave," it is definitely a worthwhile read.  The premise is that if you give off positive energy, it will be returned through "the universe" back to you as all energy is related and intertwined. Each chapter of the book has a summary of the high points and has several quotes throughout the book from famous leaders and thinkers.

One of my favorite quotes in the book:

"I am still determined to be cheerful and happy, in whatever situation I may be; for I have also learned from experience that the greater part of our happiness or misery depends upon our dispositions, and not upon our circumstances."

You can learn more about the book at: http://www.amazon.com/s/ref=nb_sb_noss?url=search-alias%3Daps&field-keywords=the+power

Where to find the shot glasses: I purchased small plastic shot glasses at the "dollar store" and it was about $1 for 20 glasses - I bought three packs. You can also use glass shot glasses, or they make special dessert shot glasses if you are making a smaller quantity. These were 1.25 oz glasses, but I think it would work even better if you can find 1.5-2 oz glasses.

Key Lime Pie:
* Note:  Next time, I would mix melted butter into the crumbs and then press into the glasses instead of just putting the cookie crumbs in dry.

* Note: I would also add melted butter to the graham cracker crumbs and pack them into the glass vs. putting the crumbs in dry next time. 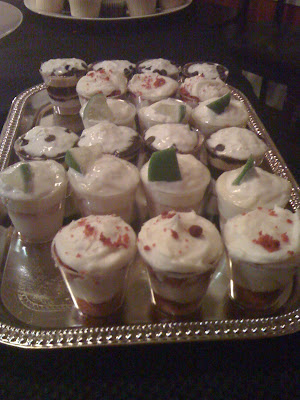 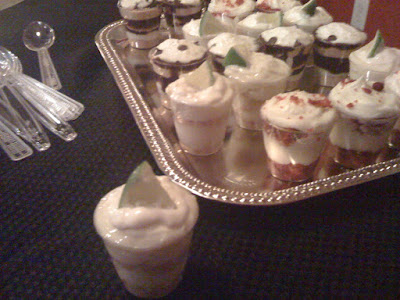