It’s a sunny beautiful Spring Day in Atlanta and it feels like Summer. My Blue Apron box is lost in transit with FedEx for the second week in a row. Whole Foods via Amazon Prime to the rescue with delivery in two hours. 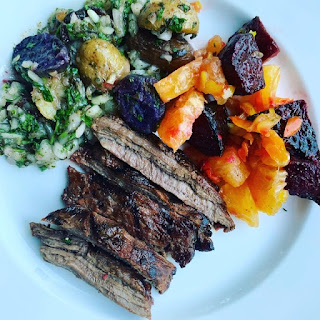 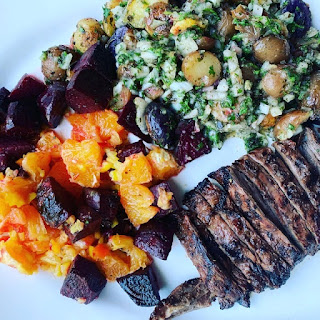 Here’s what I did:

- Pour some Worcester sauce, olive oil and sea salt on the steak. Let marinate. Overnight would be best, but I did for about an hour
- Boil Water
- Cut potatoes in half and beets into quarters
- Drop into salted and boiling water
- Preheat grill outside
-  Let potatoes and beets parboil and small dice an onion, a handful of banana peppers, and some parsley
- Peel and slice the orange
- Put orange into a bowl with banana peppers. Pour a little white balsamic if you have it over them and a pinch of sea salt
- In another bowl, put the onions, parsley, a pinch of salt, and pesto it you have it
- Drain beets and potatoes and put some olive oil and salt on them
- Go put steak on grill and potatoes/beets on grill. The potatoes/beets will need to go on a piece of aluminum foil so it doesn’t fall down the grates
- Flip the steak once nice and charred
- Once other side cooked take the steak inside and let in rest covered in aluminum foil loosely
- Let potatoes/beets stay on grill about 5 -10 mins more
- Slice steak
- Put beets in bowl with oranges
- Put potatoes in bowl wirh onions/parsley/pesto